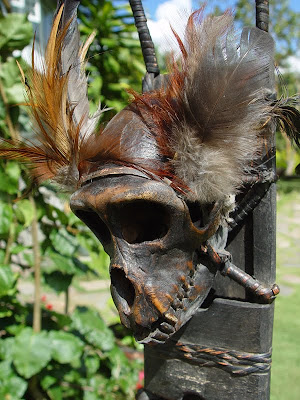 When I was in my Navy Seabee builder training school in Port Huemene, California, I befriended the son of the base Commander who was a skateboarder. It was weird being friends with him cause I'm not sure if I was supposed to be hanging out at their house or not but this kid had some really cool stuff living all over the South Pacific and such. He spent a few years growing up in the Philippines and owed all kinds of weird ceremonial monkey skull knife things. I don't know how to describe them but they were crazy creepy looking and I doubt many people in the States have them since I doubt they are legal to bring over but he was able since he was in the military. He also had an amazing collection of rare and valuable seashells from all over the world. I'm not sure how I feel about owning such things myself since I would never want to contribute to the death of animals for novelty, no that these were, but sometimes when something weird like that becomes popular, it inevitable. I tried looking them up and this is all I found. I think I might have photos of the ones I saw but I was a young skateboard photographer back then and tended to only use a fisheye lens for everything..
Posted by Adam Wallacavage at 10:39 AM