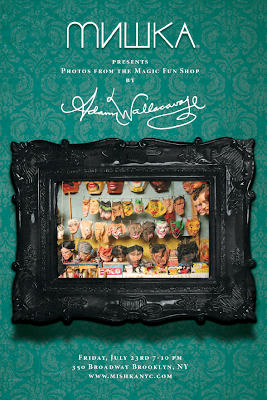 As Adam Wallacavage recounts, Magic Fun Shop was a dusty mosoleum of a relic shop commandeered by an owner who looked like Rip Van Winkle awakening from a 100 year nap. Situated on the North side of Philladelphia, Wallacavage discovered the novelty shop by chance in 1995. Over the course of the next 10 years, he befriended the shop owner and slowly amassed a personal collection of vintage masks and 1960's adult gag toys that o...nce called Magic Fun Shop home. During this ten year "Twilight Zone" span, Wallacavage documented his findings through a series of photographs until Magic Fun Spot mysteriously closed it's doors for good in 2005.

Mishka is proud to host a series of Wallacavage's documentation over this period at 350 Broadway. The show - aptly titled Photos From the Magic Fun Spot - boasts a library's worth of photographs spanning Wallacavage's fascination and interaction with Philladelphia's hidden novelty shop. A number of relics and gag-toys will also be on display. Photos From the Magic Fun Shop will run for six weeks starting with an opening party at 350 Broadway on July 23rd. A limited edition t-shirt including various prints will be available for sale at 350 Broadway.

Inspired by an obsession with the ocean and a fascination with extravagant interiors of old churches, Adam Wallacavage transformed the dining room of his South Philadelphia Victorian Brownstone into something from the pages of a Jules Verne novel. Teaching himself the ancient art of ornamental plastering, Adam evolved his new found skills into making plaster cast octopus shaped chandeliers as the final touch to his underwater themed room. His first showing at the Jonathan LeVine Gallery in June of 2006 featured a pink-glitter octopus chandalier adorned with pearls from famed jewelry designer, Tarina Tarantino.

Beyond making chandeliers, Adam Wallacavage is also an accomplished photographer, documenting artists, musicians, daredevils and all things weird and wonderful. His first book, Monster Size Monsters, was released in August of 2006 through Gingko Press and spans fifteen years of his photography.

Adam Wallacavage, a founding member of the Space 1026 Collective in Philadelphia, has long documented skateboarding and the underground art scene. His curiculum vitae includes shooting for various skateboard magazines in the early 1990’s including Thrasher, Slap and Skateboard Mag and transisitioning to underground-art publications like Juxtapoz and Shepard Fairey’s, Swindle Magazine.

Adam’s approach as a photographer was born of the need to set up and break down his equipment very quickly—a necessity for his early assignments that required shooting skateboarders in dodgy or illegal locations. His signature trait as a photographer is his eclectic choice of bizarre subject matter, which celebrates the neglected, the marginal, and the ridiculous. His subject matter spans everything from the mundane to the bizarre; “alien” spacesuits made out of lint, zippers show on monster outfits, and chariots with ATV off-road tires are only a few of Adam's realized ideas.

For more info about the artist, please visit adamwallacavage.com

mishkanyc.com
Posted by Adam Wallacavage at 9:02 PM No comments:

Posted by Adam Wallacavage at 5:37 PM No comments: